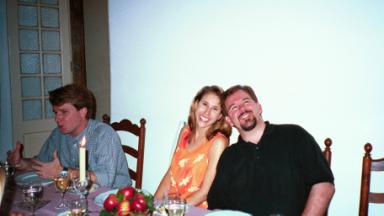 Now with many embarassing pictures, thanks to Brian Pier (on the right)!  Next to him is Tracey :-)

From August 20 to 23, a great event organized by the international and portuguese Swatch Club took place in Lisbon, Portugal, the city of the Expo'98: 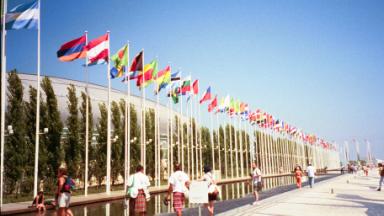 Flags at the Expo 98
Around 50 people from all around the world (USA [about 15 people], Italy, Switzerland, Germany, UK, and even two ladies from Japan :-) took part at the event.  Many of the participants, myself included, do think that this was one of the best (or even the best?) Swatch event ever.

We had so much fun, we got to see many nice places in and around Lisbon, friendliness of the portuguese people was great, and the swatchy part of the event was also worth the trip because the Adamastor special is really beautiful!

On those four days, the swatch spirit (whatever it is exactly :-) was really alive... If you are interested, here's a short report about what you have missed:

After the arrival in Lisbon on Thursday, August 20th, we had a dinner in a luxurious restaurant (Cozinha Velha) in the palacio nacional in Queluz near lisbon.  Great food, great surroundings, great atmosphere.

On August 21st, there was a special "Swatch" day at the EXPO 98.  In the morning, we first had a guided VIP tour (no queueing! [and the queues were long (>3 hours for some pavilions)!]) through some parts of the Expo.

Queues at the Expo

We saw the Ocean pavilion, world's second biggest  aquarium  (they even had penguins :-) and a great Cirque de Soleil-like performance at the 15000 seats Utopia pavilion.   The only real queue was at the entrance where we had to use our preloaded Adamastor access swatch as a ticket.  Getting access took about 30 sec. per person, a real (eg. paper) ticket would have been much faster :-)  Obviously, the access technology still has to be improved.  I can't imagine that things are soo slow in ski resorts.  The lack of speed at the entrance may be due to the fact that the chip in the watch had to be rewritten (reprogrammed) at the entrance. 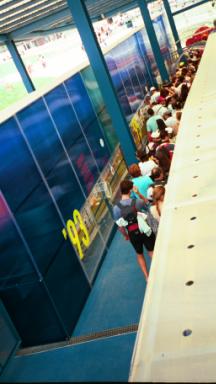 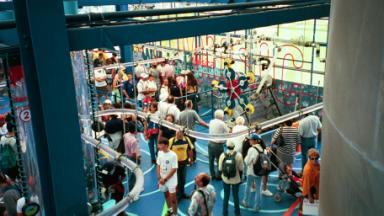 Later that day, after a lunch in the VIP section of the swatch pavilion, around 300 portuguese club members (they have 3000 members in Portugal!) and the 50 international club members took part in an exhausting (it was soo hot!) and challenging quiz. The Swatch pavilion was designed by Scott Oliver (check out the link with lots of great photos!). 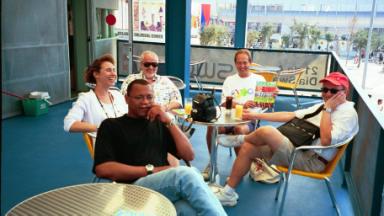 VIPs at the swatch pavilion :-) Among them Tony (from Washington Pen) and Tom Rolnicki (a swatch doctor :-)

Teams of 2 to 5 club members had to answer questions about specific Expo pavilions (Switzerland of course, UK, Mocambique, Macau etc.) and about Swatch of course.  Thanks god that Sam brought his Bonello guide :-)  The only bad thing about the quiz (and the only bad thing about the whole event) was the last part of the quiz where team members had to sell swatches to the public at the swatch pavilion in order to get points for the quiz.    I think that this was a stupid idea, we already have given enough money to swatch :-/  Prizes for the quiz were purchase rights for some real good swatches (Perfect Timing (504/700, so there are 196 left in the swatch warehouse :-), Photograph/Journalist, Olympia II GZ 404, Xian LaX, Orb, Sam Francis etc.) and for Adamastor specials.  Yes, fortunately, my team ended up in a very good place (but we worked hard for it :-); no, I won't tell you which watch I was allowed to buy.

In the evening, we had dinner at the restaurant of Castel Sao Jorge in Lisbon.  Excellent **** food again and definitely the best view of the city!  So far for the swatchy part of the trip.

On Saturday, we had a city trip in Lisbon. 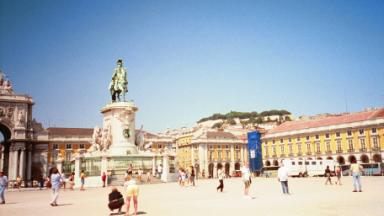 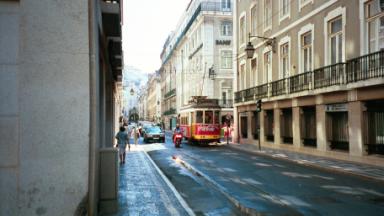 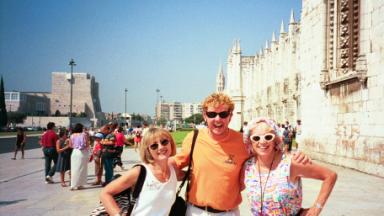 Swatchers (Claire, Alex, June) in front of the monastery of jerome (the gnome? :-)

We visited the Alfama, the huge padrao dos Descobrimentos (discoverer's monument), and other nice places in the morning.  Next, we drove to the magnificient town of Sintra. 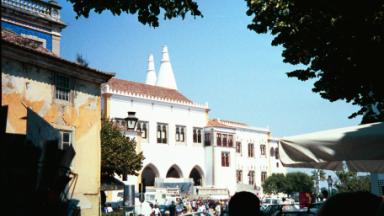 Sintra (yet another beautiful palace :-) 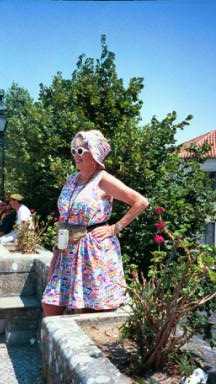 After that, we headed to the most western point of Europe, the Cabo da Roca.  We all received a diploma that we did not fall from the edge of Europe :-)

In the evening, it was party time on the beach! 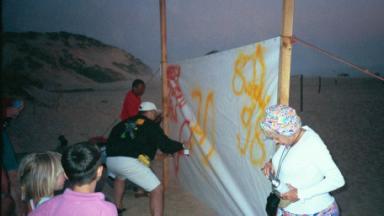 Action painting on the beach! 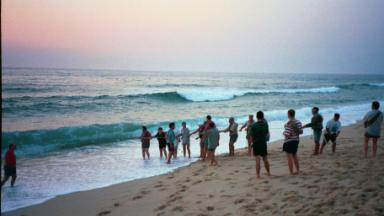 Besides the international gang, around 50 club members from Portugal were there.  We had a great time laughing, dancing, drinking Sangria, and playing some games on the beach. 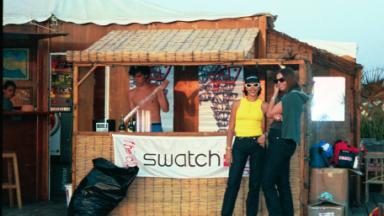 Swatch on the beach!

Again, there were attractive swatch prizes for these games:  Swatch water bottles, a Photograph!!, a Journalist!!, and a Portuguese Virgin Megastore special.  We found out that Rich dances the best Macarena, Tony dances the best Limbo, but Patrick's entertainer qualities can be improved a bit :-) 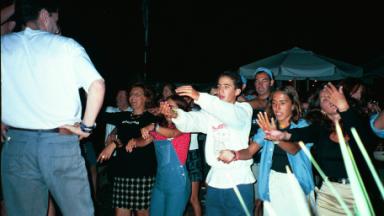 Too bad that most of the club members had to leave Lisbon on Sunday already.  Many new friendships were made.  Thanks Portugal for hosting such a great event; great organization also by swatch the club:  the trip was definitely worth the money.

I was lucky enough to spend another week in and near Lisbon.  All I can say is (not 100% serious :-):  Forget Paris, forget London, go to Lisbon, it is such a beautiful city.  I could spend weeks there walking around this city, there is so much to be seen there.  On Saturday, 29th, I managed to see David Byrne in concert at the Expo.  It was somewhat disappointing but that's another story.

Back to "Stay tuned to Swatch"