On 7 and 8-JUNE-2001, the traditional meeting of the gold and pioneer members of Swatch The Club took place in Biel, Switzerland.  This year, I became a gold member, so I could participate.  We met at 10am at the headquarters of Swatch in Biel:

Actually, the first meeting took place in the show room of Omega watches (the Omega building is the neighbor building of Swatch).  About 100 gold and pioneer members from all over the world (Europe, USA, Hong Kong, and more) assembled in the room.  Ton ( [former :-[ head of Swatch The Club) explained the programme for the day and the next:

...and we walked over to a room where usually the new collection of Swatch Watches are presented to managers, sales people, etc...  Normally, this room has very restricted access (controlled by Swatch Access of course!) but for the gold and pioneer members, they made an exception.  We got a preview of upcoming swatch models (sorry, no details possible, but exciting things will be released will be released in the future!) by the product management of Swatch.  Nick Hayek Jr. gave a short visit, shook hands and talked briefly to the crowd.  One thing that he had to say was that a (much sought after!) Swatch pirate flag...

...was hanging on the outside of the window of his office (about 5th floor of the building on the first picture of this page).  Nick said that we all could try everything to get this flag, it simply was available for free to the first person being able to get his/her hands on it :-)  Brian was quickly able to get to the office of Nick but no employee had a key to the office of the boss!  (well, that's security :-) so in the end, Markus got the flag:  He was able to locate a looong ladder and he climbed up all the way to the 5th floor!  But this was not the end of the story of the flag, more later...

After the product presentation, we had lunch at the canteen of Omega.  In the afternoon, a special packaging 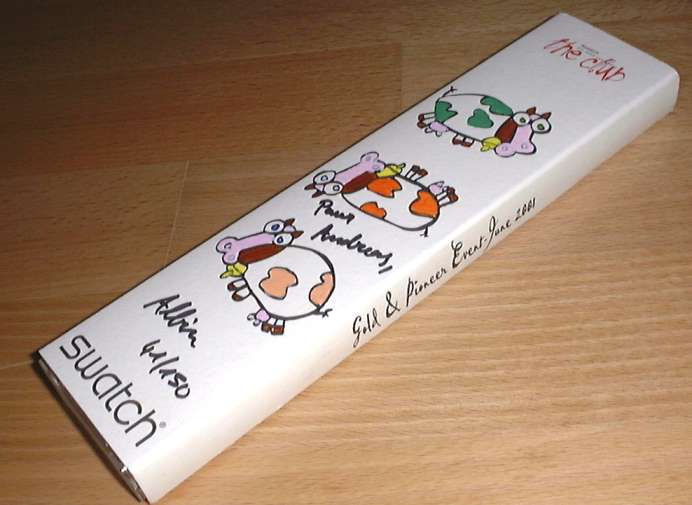 For the dinner in the evening, we were invited on a boat on the Lake of Biel:

Now, that's a use for Vendôme swatches!

We had a magnificient Fondue (not cheese!), everybody had a good time.

After dinner, Markus initiated yet another surprise!  He gave his new possession, the swatch skull pirate flag, back to Ton as an item for a charity auction!  A generous gift!  For more than 1800 Swiss Francs, the flag went to (guess who!):  Paco (also a new gold member) from Spain:

Together with donations from other people, Ton collected about 2300 Swiss Francs.  Nick Hayek Jr. had promised to double the amount, so in the end, 5000 Swiss Francs were collected as a donation for a charity.

Overall, we had a great and relaxed time on the boat.

Friday morning, we had a visit to the micro electronics company EM Microelectronic-MARIN.  This company belongs to the Swatchgroup and designs and produces special low-voltage, low-power integrated circuits for watches (eg. access swatch), telecommunications, computer periperals (every Logitech mouse contains an IC by EM Marin!), industrial electronics, and automotive (anti-theft devices).  Did you know that an access swatch has 1 kbit of memory (some have 4 kbit)?  The visit was very very interesting (at least for me :-) and they showed us a lot of interesting stuff (also custom made LCDs etc.).

Back to Biel, we had lunch and then a short visit to the Omega museum.  A great collection with time pieces with a lot of history, eg.:

Back to Stay Tuned To Swatch