The Luzern auctions in the early 90s

Here is a great story that Desmond Teo from Singapore sent me. Credit is also due to Dan Komar.

In 1991, Robert Casagrande, a wealthy Swiss souvenir shop owner and a small team of Swatch enthusiasts established the first International auction for Swatch. He wanted more than a simple auction, more like a multi-day event complete with organized dinner, traders bourse and of course a quite glamorous auction with many rare Swatches and also plenty of unusual prototypes. Additionally, his team decided to devise a multi-year theme to go along with the specially created event "Timepiece" that they would create each year. They never really told anyone about this theme until it became evident in the third year.

The first watch was called the Big Flat. The concept of Fire was to take actual Swatch dummies and smoosh them under pressure and heat to create a unique looking piece of art. The concept was primarily that of Klaus Zaugg, another big collector and artist and photographer, and very close friend of Robert Casagrande. So... with concept in hand, they devised a method to smoosh the watch in just such a way as to create a unique look, then mount it with a magnet onto a signed plinth (black acrylic board base). Each plinth was signed and numbered by the creator Klaus Zaugg. Robert Casagrande has a Bonaparte Big Flat given to him by Klaus Zaugg.  Below is a picture of  Big Flat #182/444, with a melted Tutti (GW700, 1990). 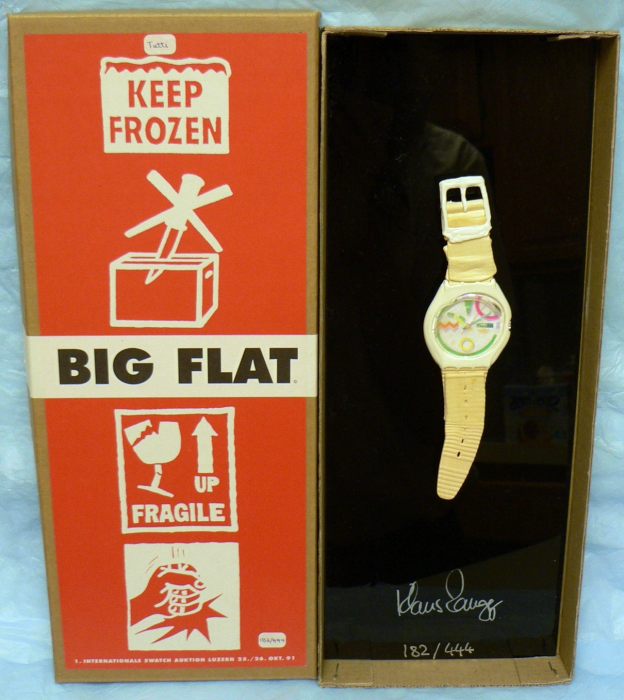 For the 2nd auction in 1992, the theme was Earth. It was the Sand watch and they got Franco Bossisio, then boss of Swatch Italia, to create for them casings that had no middle section. It was not a Swatch casing, but another plastic watch similar to Swatch and also made by SMH. They also had very tiny sand clocks made in different colors of sand. The main color was white. Lesser quantities of red, green, yellow and blue were made,with blue being the rarest.

At the very end of the run, they decided to make a very select few with actual and real gold pellets. 10 were made, numbered eg. 6/X.  Robert and Klaus gave these to special people they knew.  In the late 90s, one of these watches sold for 3000 GBP at the infamous Swatch collectors store at the Trocadero in London. 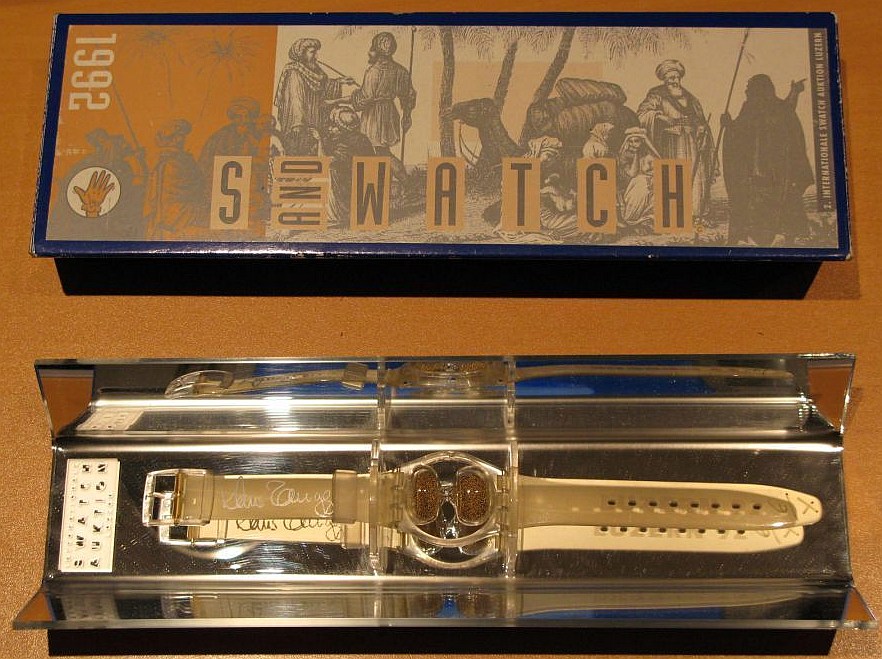 
In 1992 (31-JUL), Dan Komar also released the L'orage d'été special.  120 different automatic specials which were subject to a lawsuit with Swatch AG.  Details can be found in the following photos (incl. special note and press release) 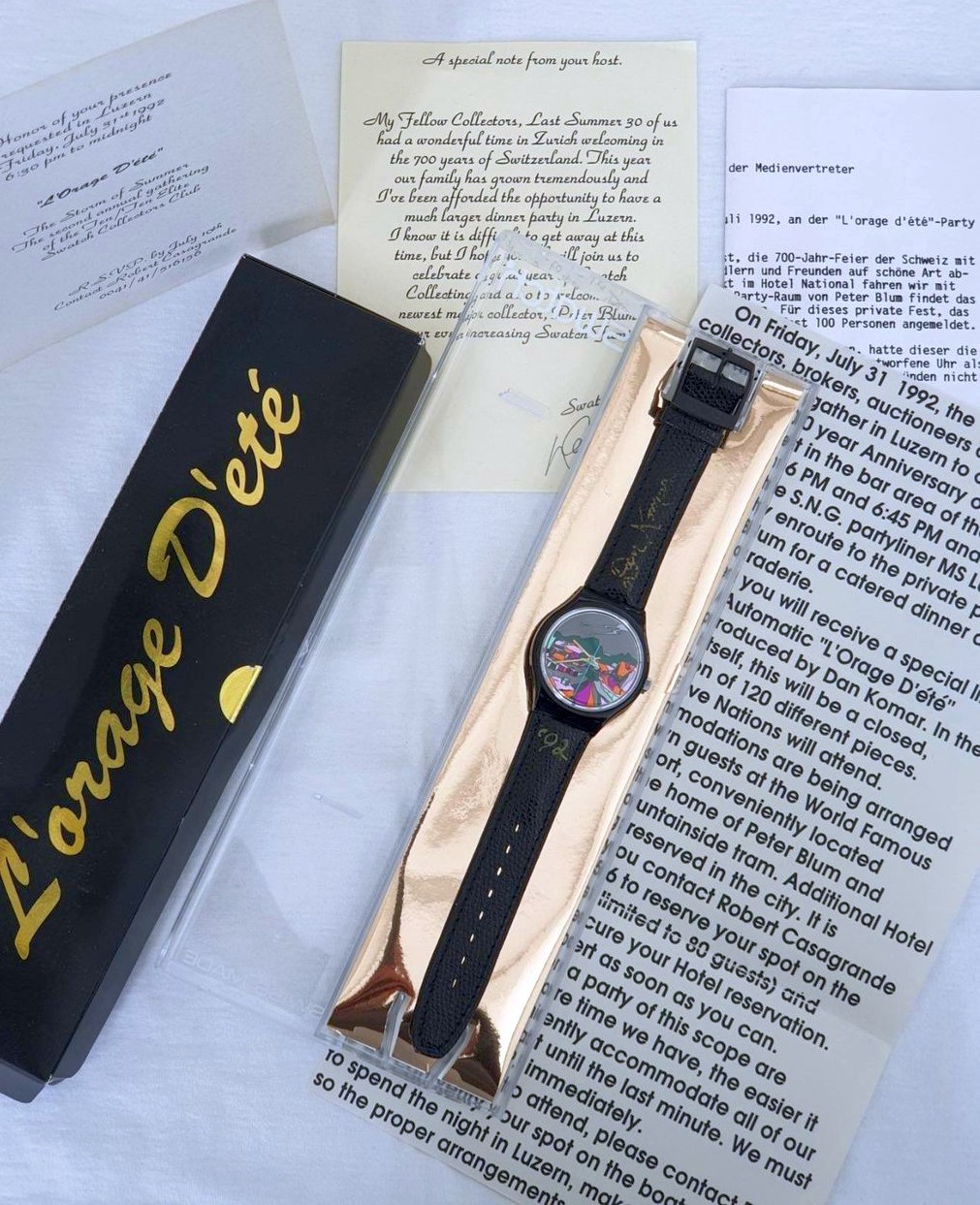 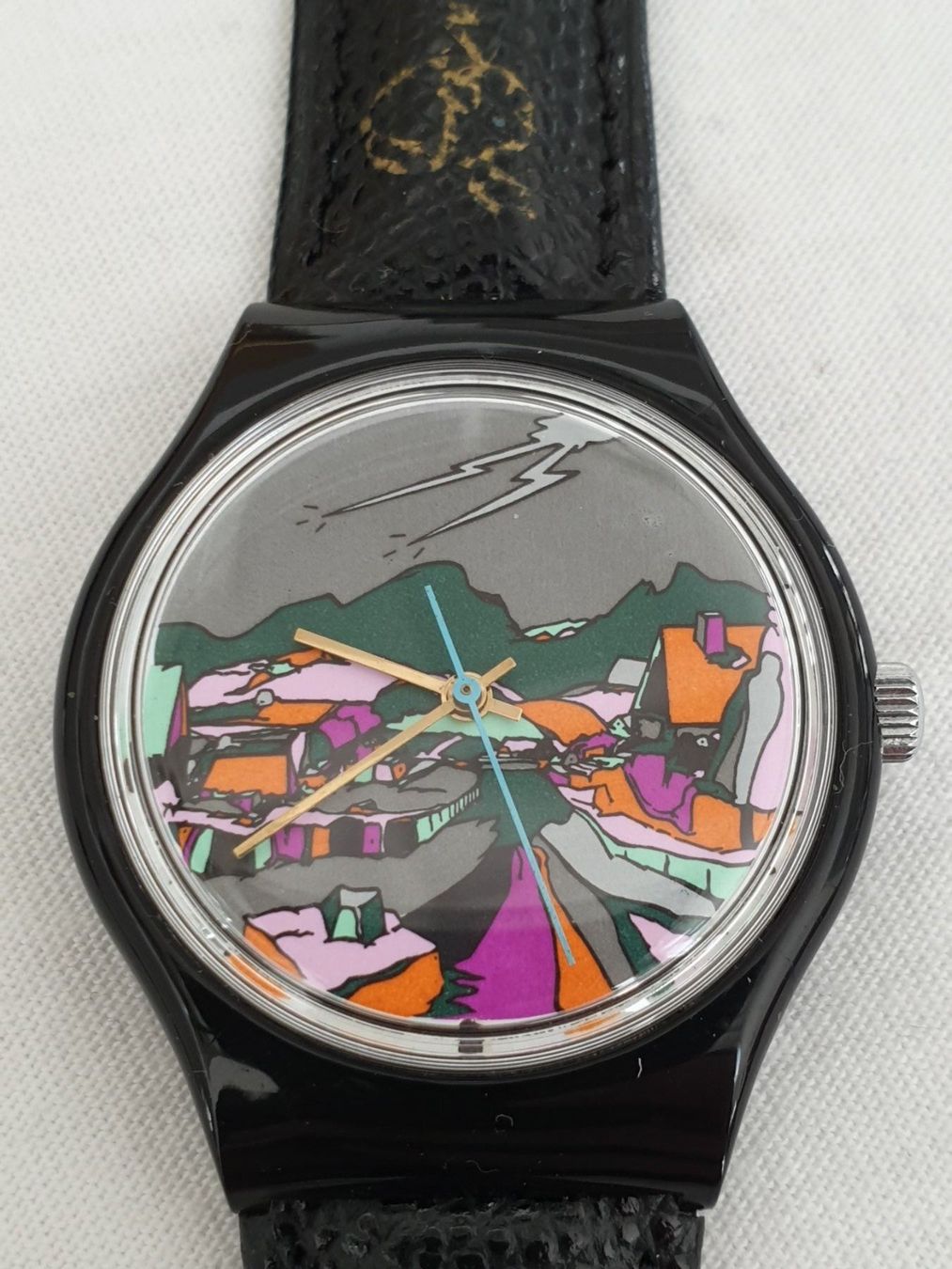 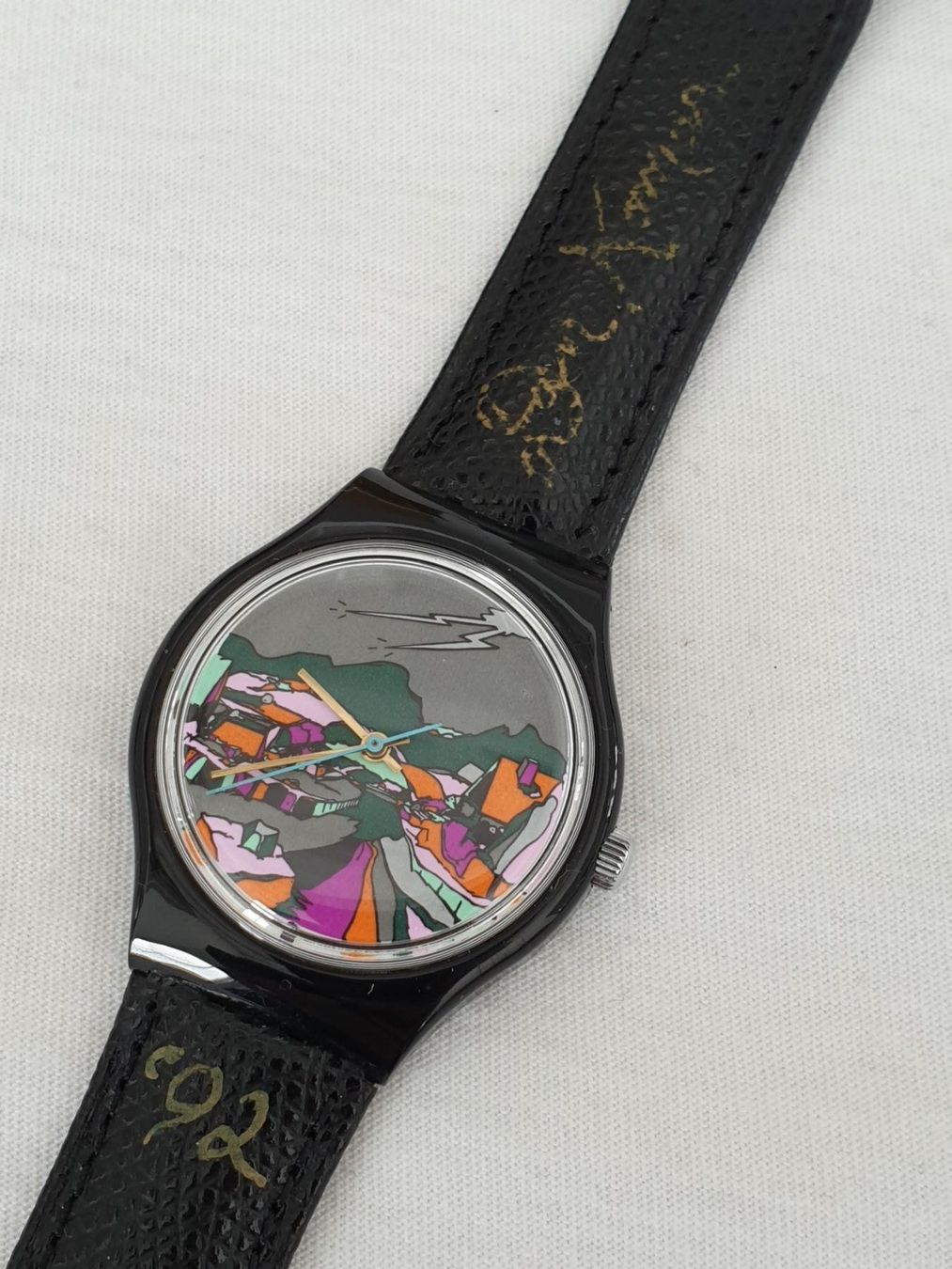 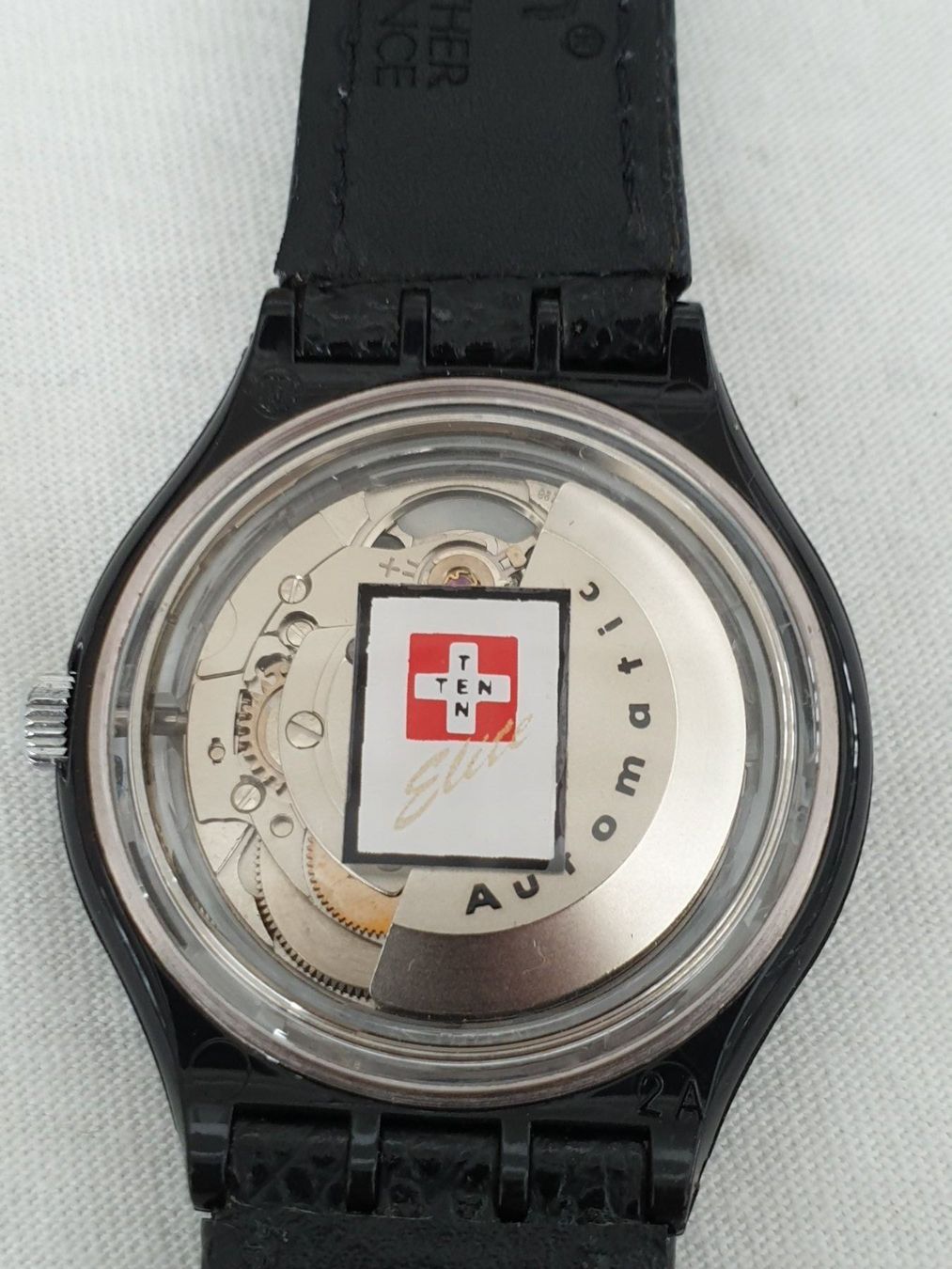 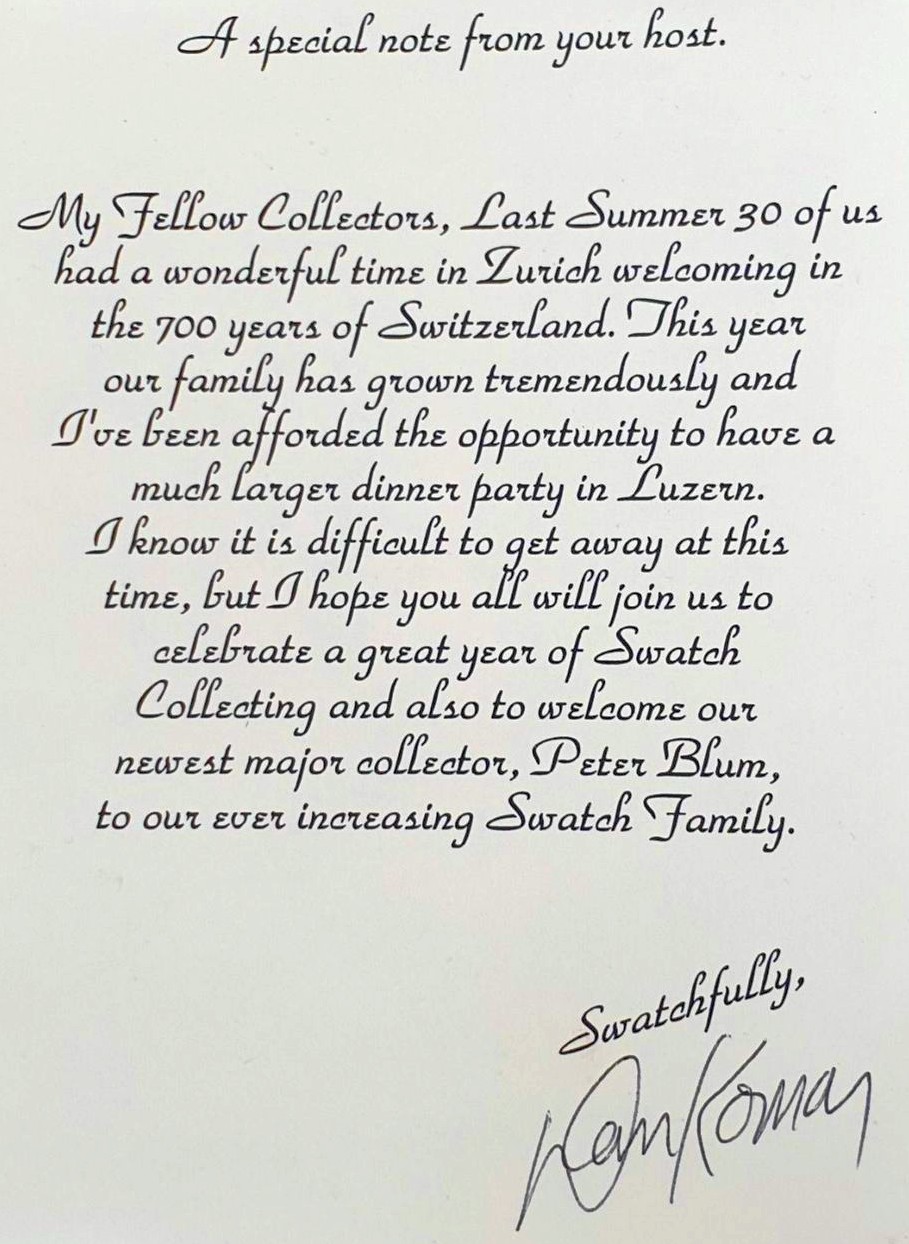 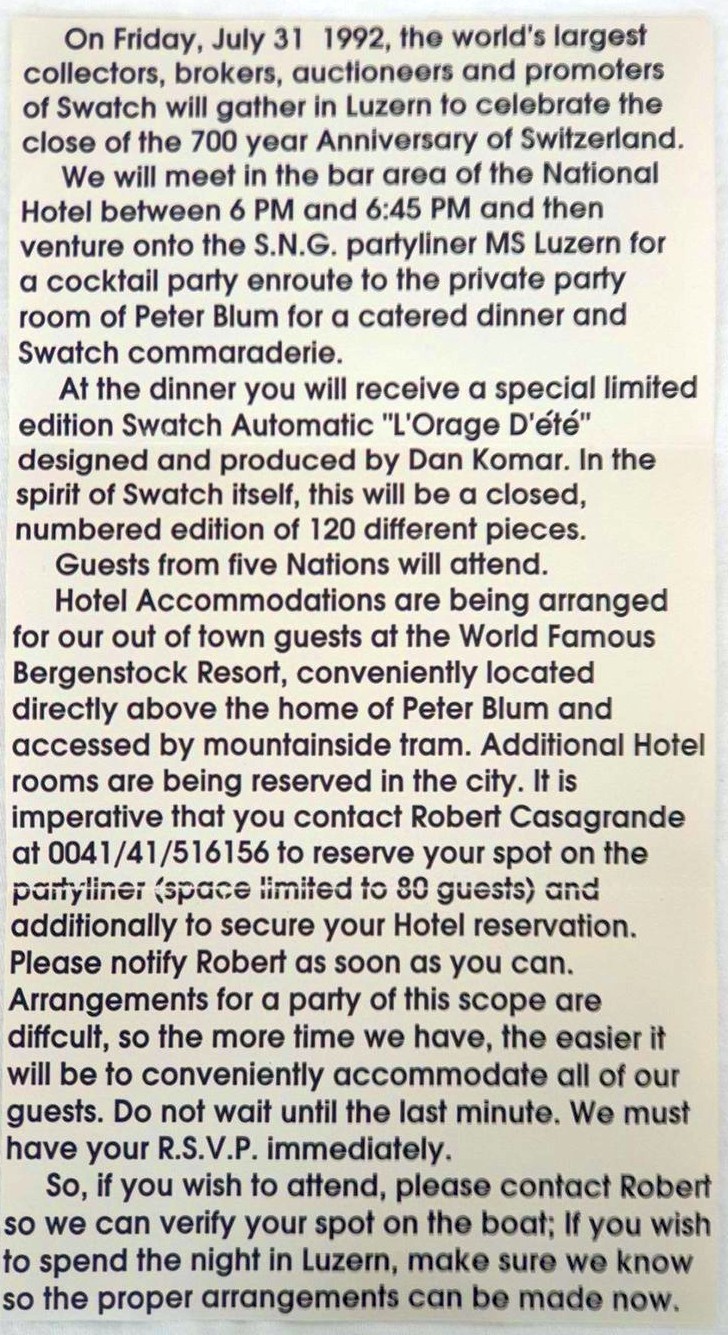 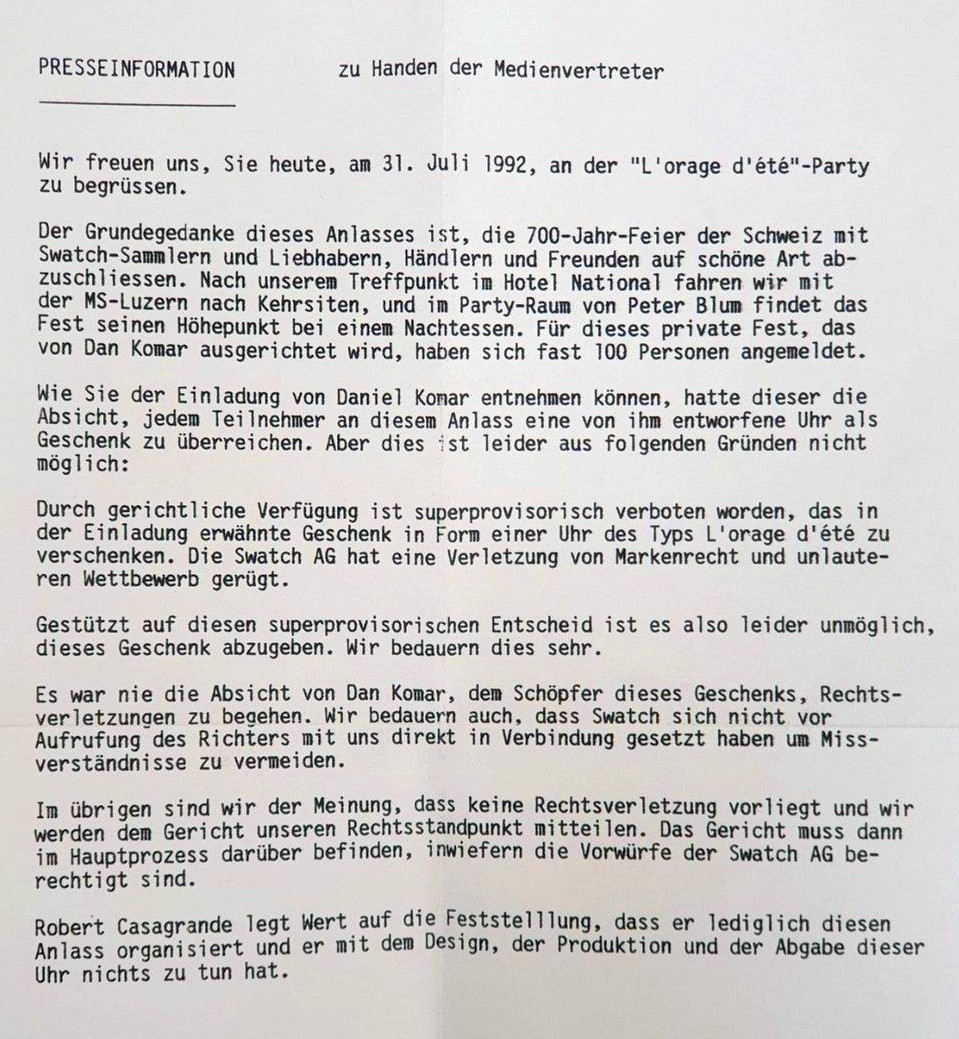 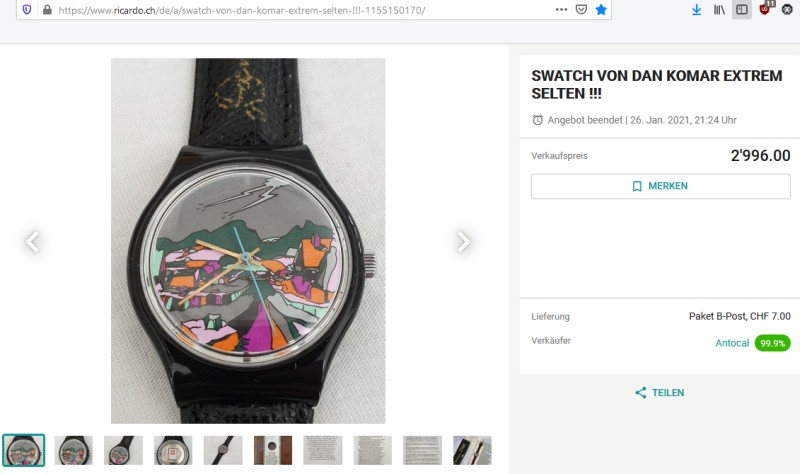 Similar to Kiki Picasso, there is a also a e L'orage d'été poster depicting 110 different dials.  The watch above is #39. 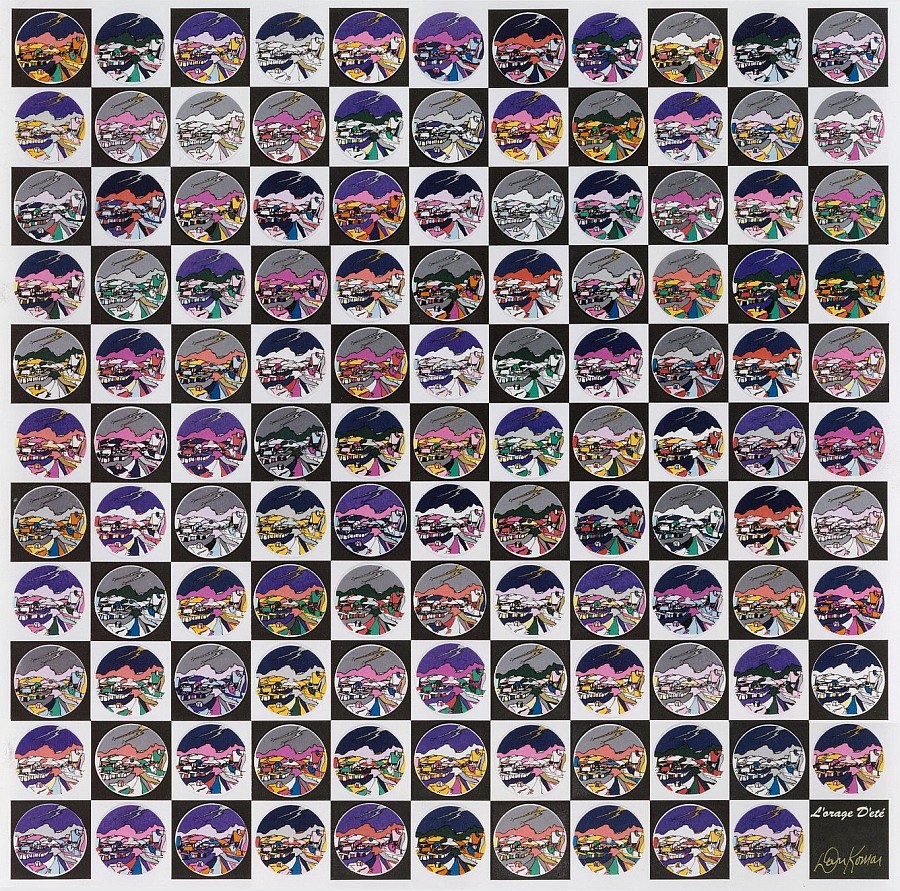 The 3rd year watch (1993) was the last one designed in total by Klaus. It was the Wind watch. Once again they used an open casing, this time of special color, and included to pinwheels that rotated in opposite directions. These too were is special colors and were sold in sets as well as individual pieces.  The pictures below show the VIP version with four watches in one box, normally, the box contains only one watch. 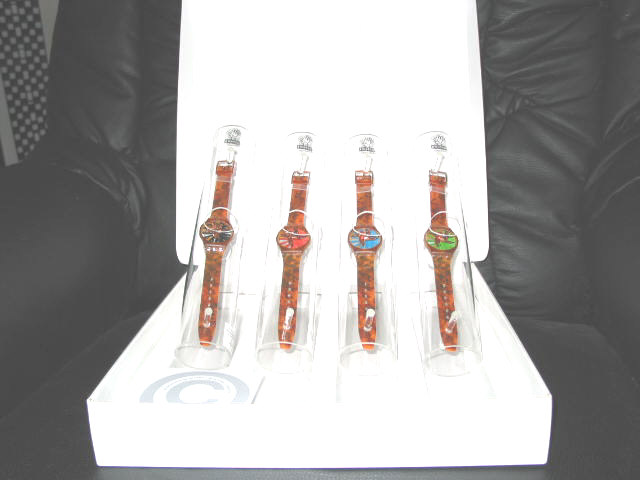 Additionally some few odd (prototype) colorations were made as one offs, around 25 total pieces. Robert Casagrande signed a prototype color wind watch for Daniel J Komar. 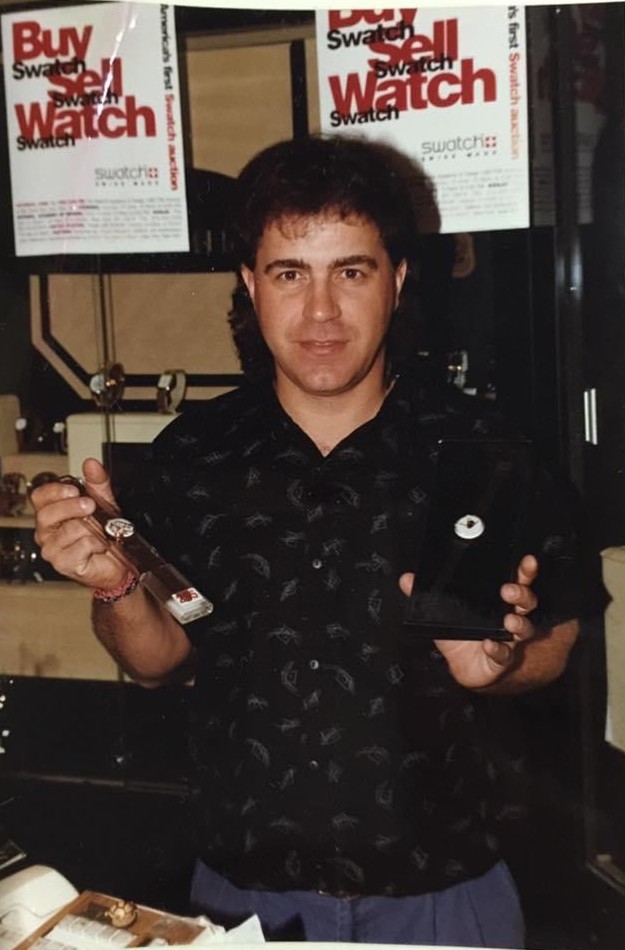 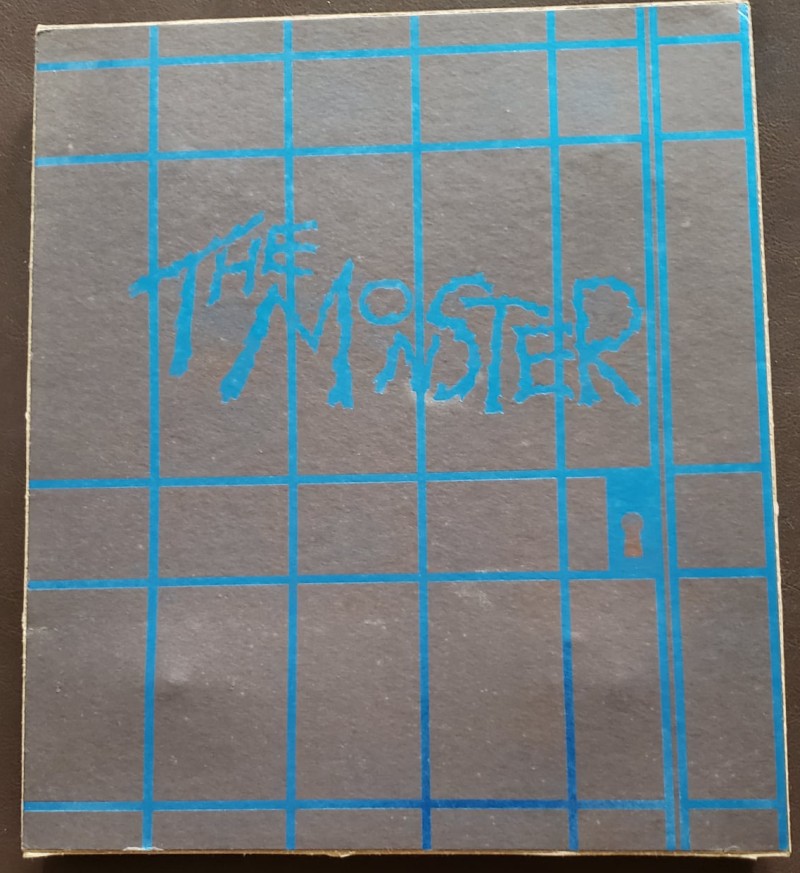 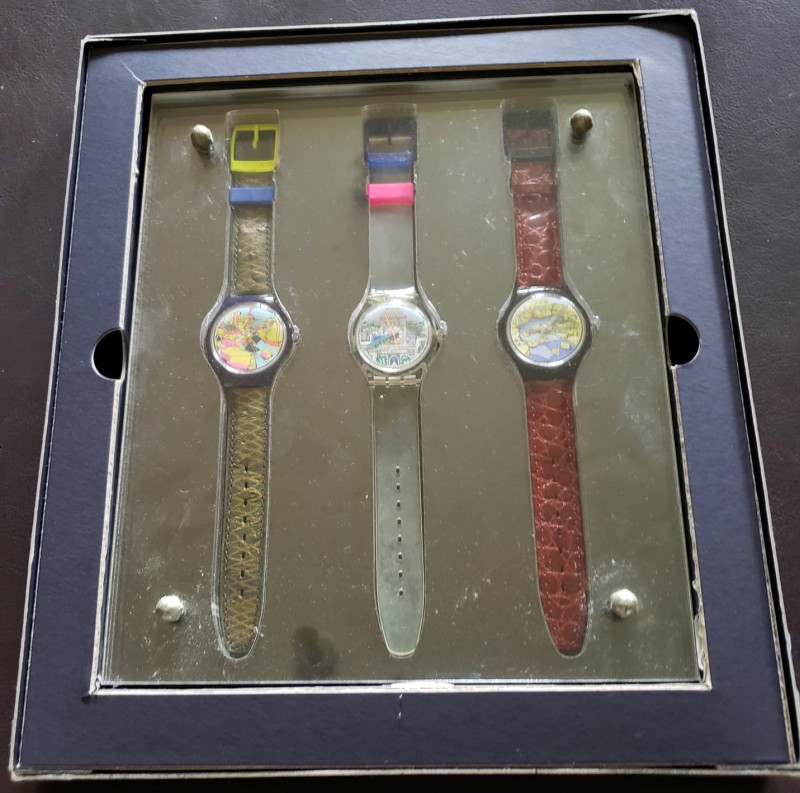 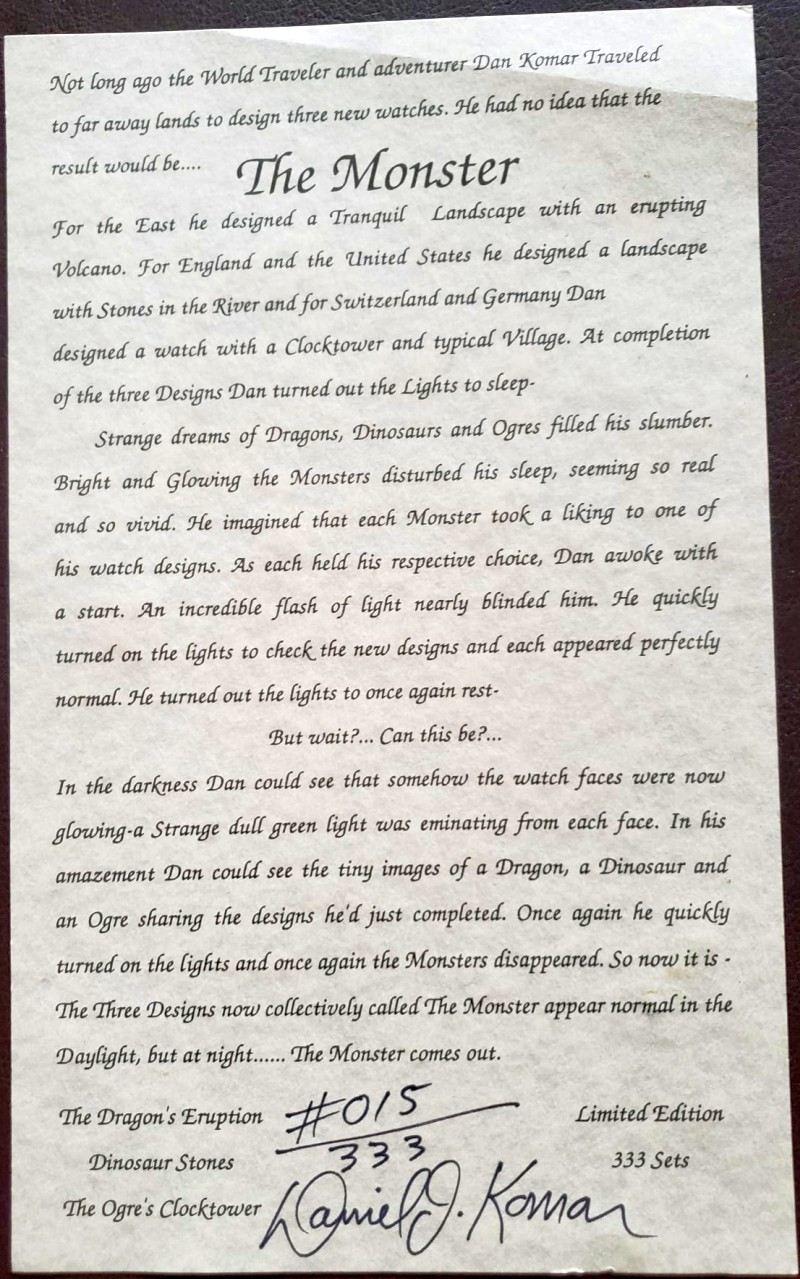 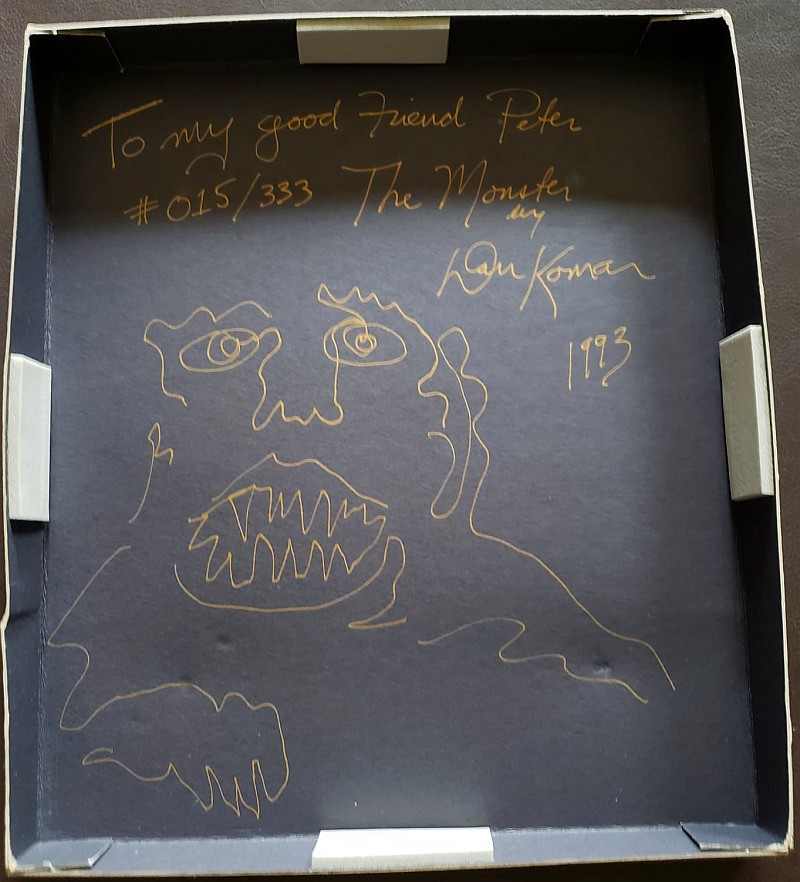 The 4th and final year (1994) of the Luzern auction saw the completion of the 4 year series with Water watch:

This was created in memorial to Klaus Zaugg who had tragically died as the result of a minor gunshot wound to his leg in a robbery attempt, then died as a result of the medications given to him at the hospital. The concept had been Klaus', but the implementation was finalized by Robert Casagrande. Robert had been in a lawsuit that entire year brought on by Swatch over his Sand watch from the 2nd year, as part of the terms of settlement, Robert had to agree that after the 94 auction he would have no more auctions and do no more non-swatch swatches. It was pretty much the end of the major Swatch era in Switzerland and brought with it the loss of interest from many collectors and especially those in Switzerland. Prices also started to drop and no other auctioneers were interested in doing any more low-end actions, save the one last-ditch effort by Rudolf Mangish in Zurich.


Recently in 2006, some prototypes and one-off's by Klaus Zaugg surfaced on ebay.  There are some nice and interesting pieces among them.  Here are the pictures:

These pictures show that Klaus was a real artist!   Here are two more interesting Zaugg prototypes:

Thanks to Markus Strobel for some pictures.