The traditional (now in its 10th year!) Gold & Pioneer Swatch The Club Event took place in Berlin, Germany, from 22 to 24-JUL.

Before the event started in late afternoon, we made a short visit to the department store KaDeWe.  Until 2-JUL, a very nice swatch exhibition called World Of Swatch is on display in the entrance hall of the KaDeWe.  Swatch is also prominent on display on the outside of the KaDeWe, very nice!

On 14-JUN,  the swiss artist Matthias Winkler created a unique maxi swatch, together with Berlin MTV-VJ Anastasia in only 30 minutes.  This maxi will be auctioned for charity until 2-JUL, minimum bid is 250 EUR.  If you want to send in a bid via email:  mail to swatchclub.germany@t-online.de, subject: "Berlin-Uhr".  But you also can place your bid at the KaDeWe in Berlin.

The highlight of the exhibition:  All 6 Puff swatches together...

In the afternoon, about 165 participating club members met at the Hotel Großer Kurfürst where we stayed during the event.

we all received this nice shirt later

At six o'clock, the head of Swatch The Club, Patrick Jaron, gave a nice welcome speech with information about the rest of the day:

We took a nice walk from the hotel, passing the huge TV tower at Alexanderplatz...

Ads for the Beach Volleyball World Championships are everywhere!

After a walk of about 20 minutes, we arrived in the Münzstrasse in Berlin-Mitte.  Swatch The Club had a nice surprise for us:  An empty shop :-)

In Münzstrasse 18, Swatch will present a new swatch store concept (probably called Instant Swatch Store? or Rumble In The Jungle?) on 9-JUL.  So the shop was already renovated but the was nothing interesting inside.  Even though, cameras were not allowed that night for the party.  Just for the evening of our party, Swatch had brought some nice furniture from the film studios in Babelsberg.  One of the sofas was used in the movie Good Bye Lenin!

Here are two pictures from the party at the (not yet) store:

And here is a picture from the finished store (opening was on 9-JUL): 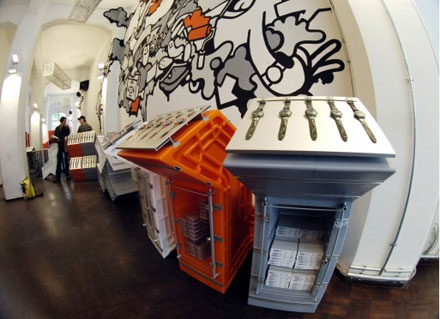 OK, back to the report of the Berlin event:  I just said:  Nothing interesting inside in the (not yet) store.  But on this evening, it was different.  The supernice Gold & Pioneer special was distributed for us

A golden Nabab special swatch (YNZ100, stainless steel) was given to the 165 participating club members.  It is the first golden Nabab swatch, and it is limited to only 170 pcs.  It comes in a very nice acrylic display: The details of this watch are really very unique and special:  It has the words GOLD & PIONEER  10th ANNIVERSARY engraved on the bezel around the face, the words THANK YOU engraved on the side(!) of the case, and the date and location (Berlin, Germany) embossed on the leather strap with the golden clasp: A perfect watch with many interesting details for a perfect event!  Collectors also received a certificate about the watch signed by Nick Hayek sr. The DJ at the party was really superb (lots of gems from the 80s! :-)  After some food and some more drinks, a lot of club members were dancing and enjoying themselves.  I managed to sneak in my mobile phone camera, so here are some impressions from the party:

we even had a polonaise later in the night :-)

TV tower at Alexanderplatz late in the night

See more pictures from the Gold & Pioneer Event (Stadtbad Prenzlauer-Berg) on page 2 of my report.