report and pictures by Tracey Waldron

The event began in the lobby of the Hotel Europa for a welcome drink.  Swatch had a wonderful cocktail drink made for us in a hurricane glass.  Here we chatted and got reacquainted with all of our Swatch friends.  Patrick Jaron made a welcome speech and introduced us to some of the new Swatch Club team members.  This lasted for about an hour.

We were then gathered into a bus and taken to the Christmas market by the Chinese Tower.  Here we allowed to wander through the market and look at the many handcrafted items for 2 hours.  There were many very nice objects here.  Some of us purchased items for presents and some enjoyed the hot, spiced wine that was available to purchase.

Once again we were loaded onto the bus and headed for dinner at the Hofbrauhaus.  Here we were treated to a wonderful buffet of all kinds of German treats.  I have to say that I enjoyed the meal thoroughly.  Everything was very tasty and there was plenty of it to eat!

During our meal, we were treated to some traditional German entertainment.  It was a bit loud and made it difficult to converse, however, it was still fun to watch.  We were entertained by the playing of spoons, a large horn, bells and a brass band.

(Comment by Andreas:  This is NOT typical German entertainment, this is just for the tourists :-)

Peter, Nikolai, and Valter having fun at the Hofbräuhaus!

There was also a display of some kind of a wood-chopping contest, exchanging of hats, singing and dancing.

Today we were up early, out by 8:30am and off to the new Jelly Store! 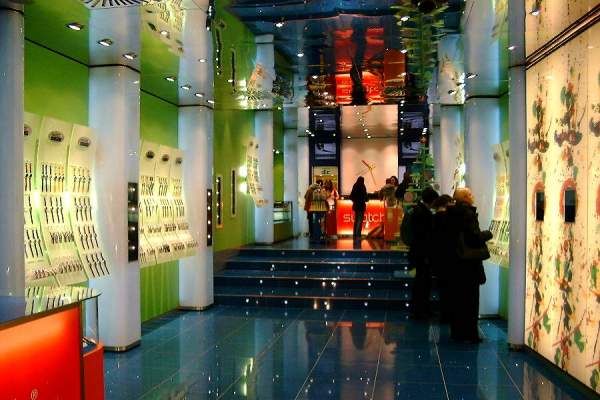 Swatch had the store specially opened for the G/P members from 8:30  12:00.  Waiters walked around serving us delicious brunch foods and drinks.  My favourite dish was the bratwurst w/mustard (found a fabulous mustard here in Germany).  Besides brunch, there were other things to entertain us too.  Swatch provided a bunch of flat, wooden, coloured ornaments we could decorate with markers and hang on a large wooden tree.

I was told that this tree would be auctioned off at a later time.

Since this was the opening day of this Swatch store there was a special available and the G/P members were the first to be able to purchase it.  Can you guess what it was?  Give up?  Another tin, called MegaInMinga (limited to 100 pcs)! 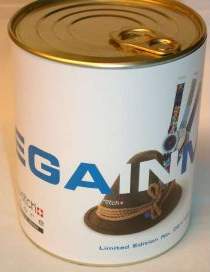 Father Christmas arrived about an hour into the festivities to hand out the special Munich version of the Snowqueen.  In addition to the Christmas special, we received a snowglobe of many major buildings in Munich in a golden pouch:

Inside the jelly store during the party

After several hours in the Jelly store, we all left to explore the city.  Most of us went on a mini-tour of Munich hosted by a German collector and wandered through the Christkindelmarket. After the tour, a few of us went to relax and get something to drink and others went to see the Keith Haring art exhibit.

At 7:30, the bus was at the hotel ready to take us for our 2 hour drive to the Garmisch for dinner at the Hotel Berggasthof.  There was a little snow at the top of the mountain.  I was told there was a beautiful panoramic view but I really couldnt tell because it was too dark.

The hotel was deck out in festive décor.  It was a beautiful, homey setting.  Swatch also added a decorative touch to the restaurant.  There were small swatch snowflakes and confetti sprinkled over the tables and large swatch snowflakes on metal post connected to a spring that were sprinkled throughout the room.  These large snowflakes were raffled off at the end of the dinner.

Dinner consisted of medallions of pork, potatoes and julienne vegetables.  For dessert, we had apple strudel with iced and whipped cream.  The meal was delicious.  To finish off the evening, Swatch gave us t-shirts and let us decorate them with various colours of spray paint using little swatch snowflakes as stencils.  Each t-shirt was a masterpiece :)

This evening really marked the end of the event.  The next morning is when the collectors would go their separate ways.  It was yet another end to a very enjoyable and successful event.  Big kudos to Patrick and his staff!!!!!

Back to Stay Tuned To Swatch.