On 15-NOV, a Swatch The Club event Train Your Touch (launch of the Touch series) took place at a fitness studio in Offenbach, Germany.  About 90 club members participated at the event (fitness training and bowling).

In the afternoon at around 3pm, we met in the lobby of the fitness studio.  Collectors from all over Germany, and even Holland, and Portugal came to "train their touch".

...busy preparing for the unknown....

Semra Kalay (head of Swatch The Club Germany) made a nice introductory speech.

We also received the nice event special (limited to only 60 pcs, not numbered): 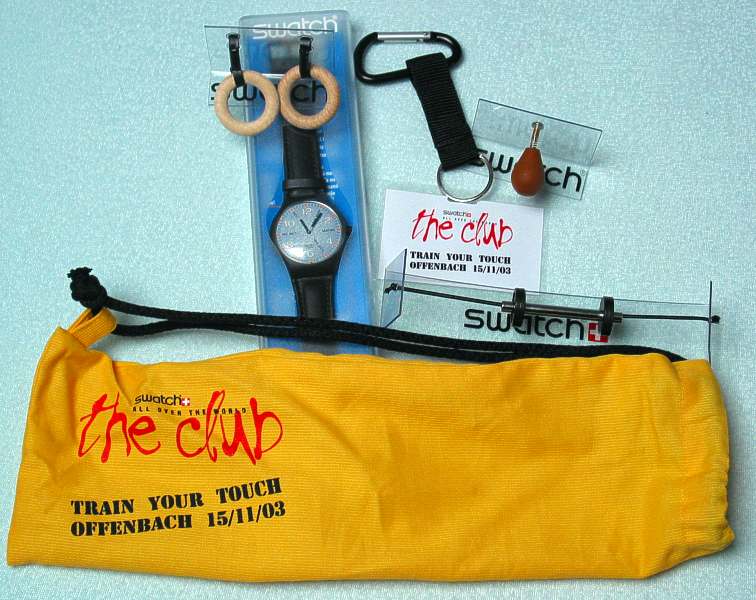 Everybody had brought their training suits, so it was quite funny to see all the familiar faces in a completely different outfit (I had to dig out my sport bag that I put aside about five years ago when switching from intense Volleyball playing to hard core swatch collecting :-)

This is about half of the group, click on the image to enlarge!  No, Henk did not bring any sport shoes :-)

We warmed up with some finger gymnastics, playing some games from our youth.  The girls were usually much much better than the boys, it took me about 10 minutes to free my fingers again :-)

After warming up the fingers, it was time for some real gymnastics.  We learned some little moves with the hands and the arms, actually, it was quite funny (although I prefer some ball games :-)

After 45 minutes, our first gymnastics lesson was over, and we had some time to spend on our own in the fitness studio.  Most collectors preferred the bar :-)

At 6 o'clock, we walked over to the restaurant where we had a nice dinner with a buffet and tasty "fingerfood".  Really excellent!

The training was not over yet!  At around 8pm, we went bowling.  We were divided into 9 different teams on 9 different lanes.  The best on each lane would go to the final where the best three sportsmen would receive a prize.

For me, it was a "first time".  The game is quite funny, especially because of the interesting counting rules.

After 9pm, the lights were dimmed down, it was time for disco bowling!

Due to some technical problems, it became quite late (around 1am) until the winner was finally determined:  Gerhard.  As you can see from the score board below, it was not a "first time" for him:

The best three participants received a prize (I think that the top prize was a Flaeck special) from Semra.

It was (as almost always) a phantastic event with fabulous value for money!  Where else can you have nine hours of fun, talks, drinks, ... for only 10 Euros?
Only at Swatch The Club :-)

Thanks again Semra, Susanne, Wolfgang, ... for the nice idea and smooth organization; again a new experience.  See you all next time hopefully (not in Geneva, unfortunately :-(  [if you go to Geneva xmas event and if you know that you will have an extra special:  Please contact me, I have lots of stuff for trade....]).


Back to Stay Tuned To Swatch.