After lunch, it was time for the next surprise on this day full of surprises.  In groups of 10-20 collectors, we were brought to a Swatch watch exhibition of around 250 watches in a unusual location:  A "time tunnel".  On our way to the tunnel, we met many dangerous looking scientists... 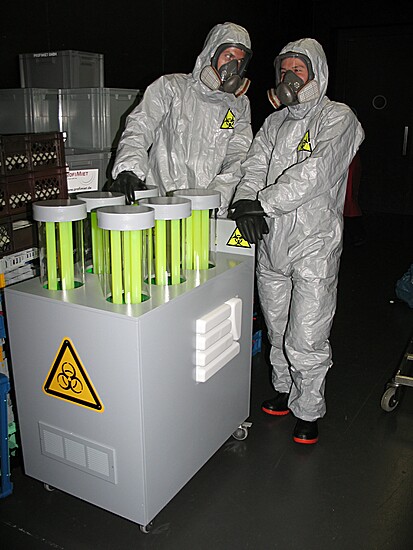 The whole tunnel was secured heavily, every 20-30 meters or so, a friendly guard was on duty.  As you will see below, this was absolutely necessary, as a lot of really rare watches were on display and a crowd of close to 140 crazy Swatch collectors was around... 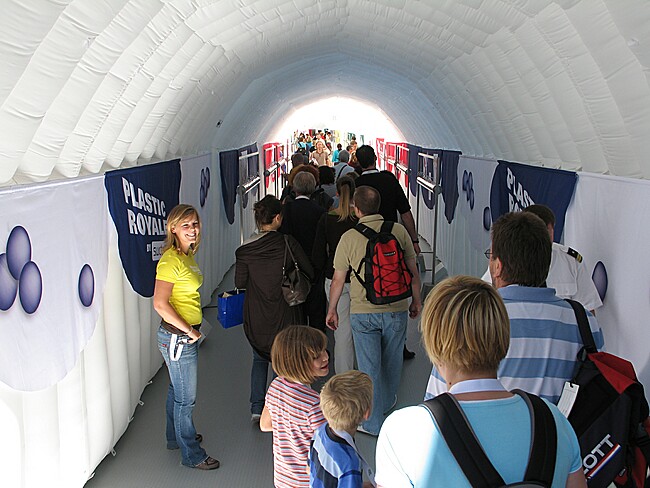 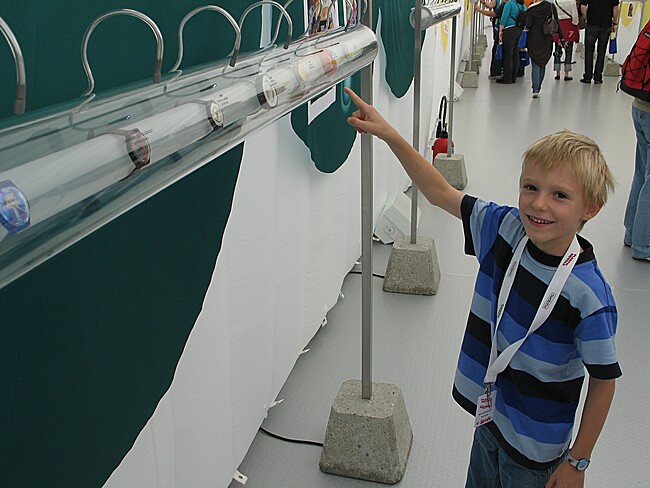 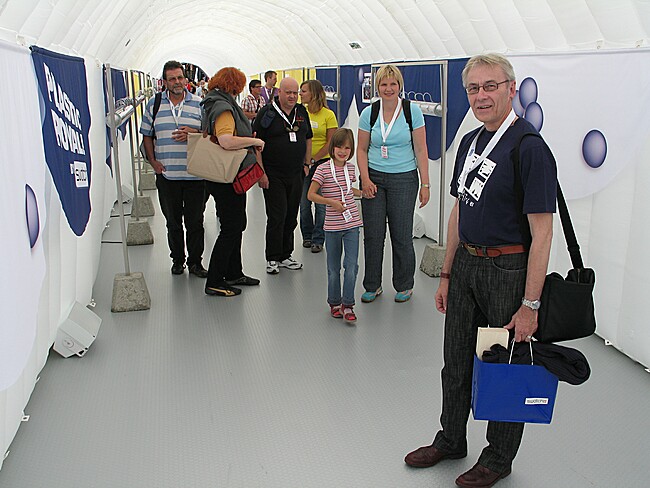 A lot of journalists (TV and photo) were around during the whole day.  Sometimes, they also filmed us collectors.  Here, an interview with Annette and Holger took place about their passion of collecting watches: 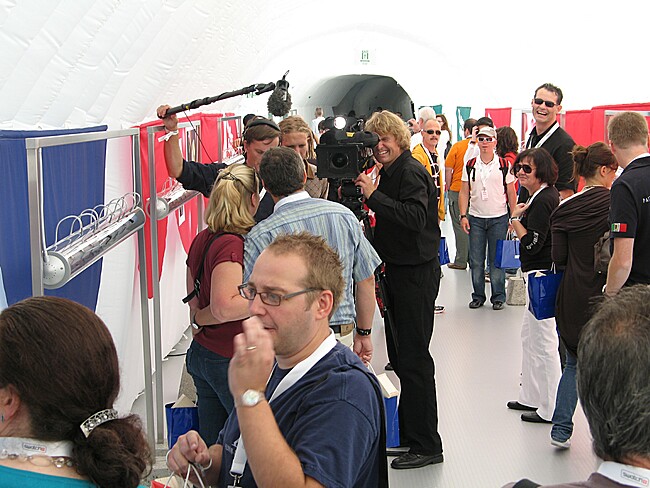 This was my highlight of the exhibition:  The Helmut Newton special Fingernails (GZ183) from 2004.  It is one of the rarest swatches, it was made in a limited edition of only 100 pcs.  You can read the interesting story about this watch in the archive section of my webpage.  One of these watches was auctioned in 2004 for more than $10000 US!  This was the first time that I have seen this watch in real life. 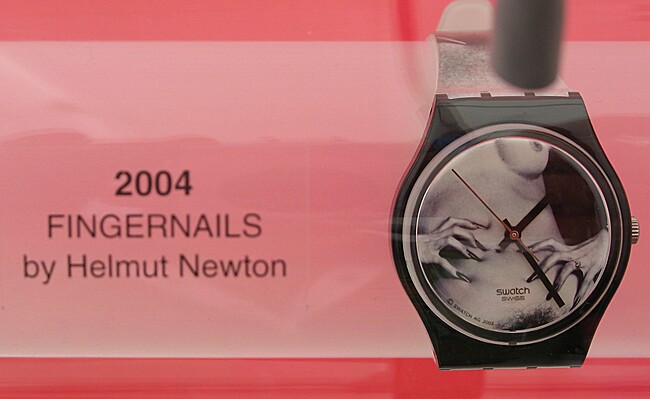 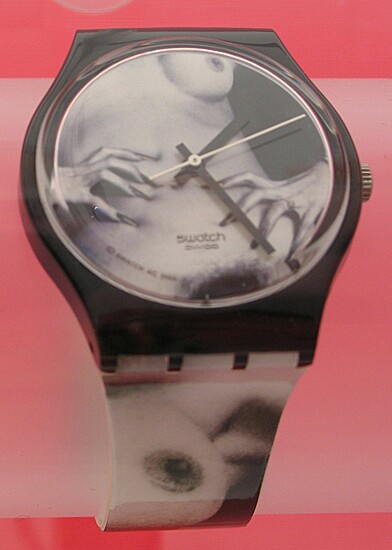 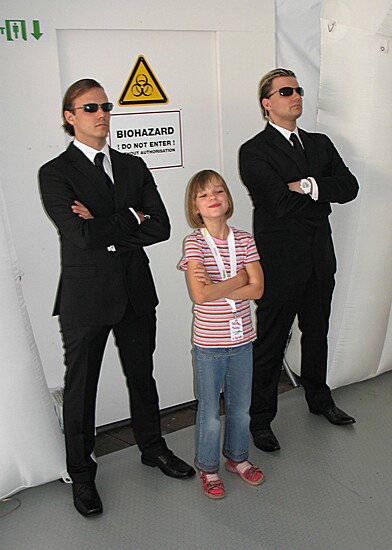 Johanna on duty!  The Men in Black never smiled!

When we left the "time tunnel" exhibition, we suddenly ended in the sun, directly on the floating stage on the lake constance. 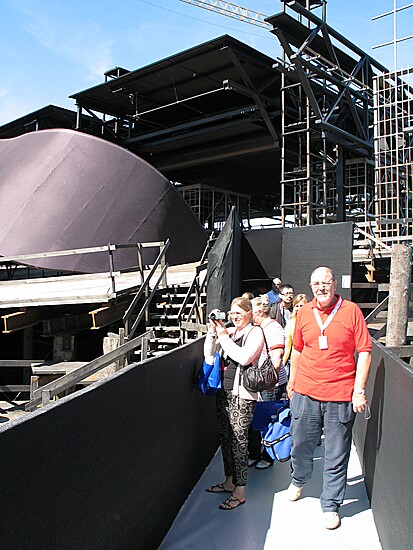 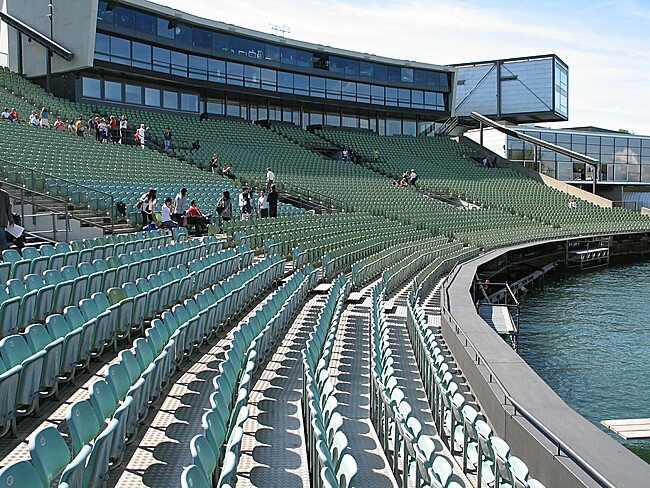 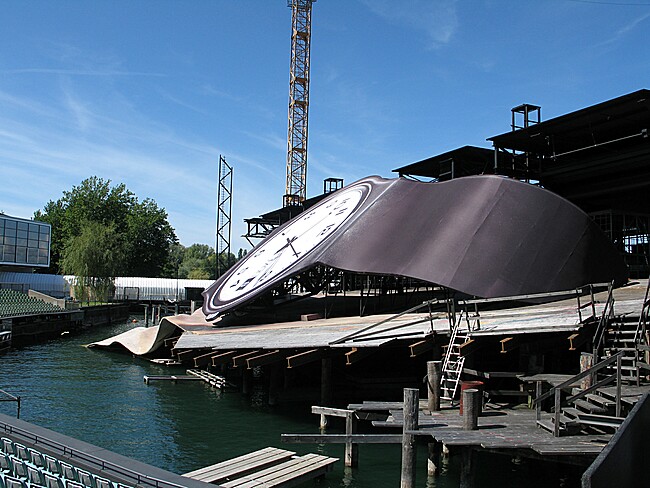 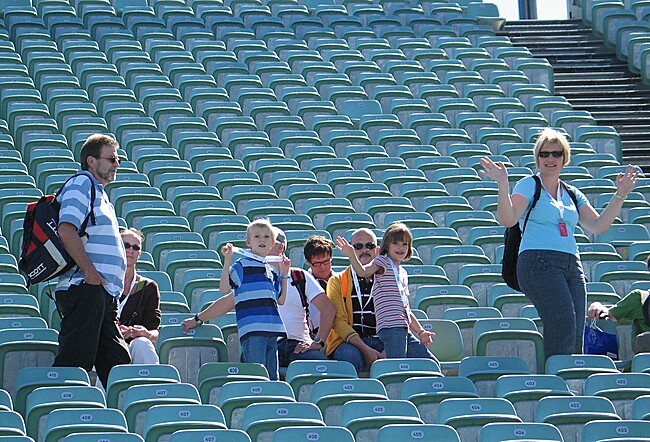 As you can see, the spectacular eye background of the stage (used for "Tosca") had been replaced by something much better :-)  A gigantic gent Swatch Once Again (GB743).  Is this the largest Swatch ever made?  Probably not.  I guess that the giant Yellow Racer Swatch in Frankfurt in 1984 was larger. 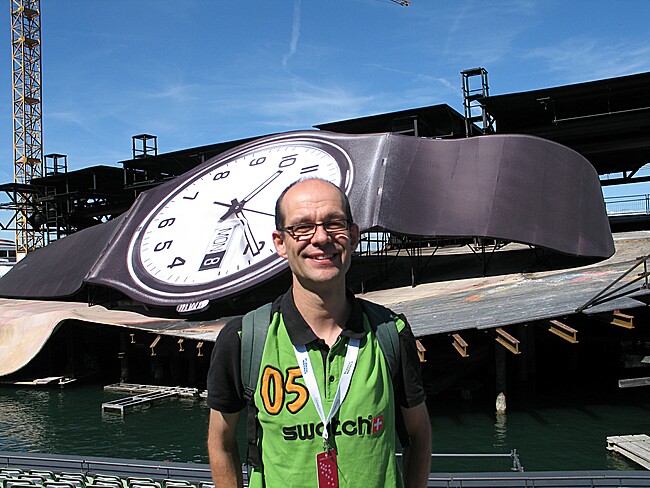 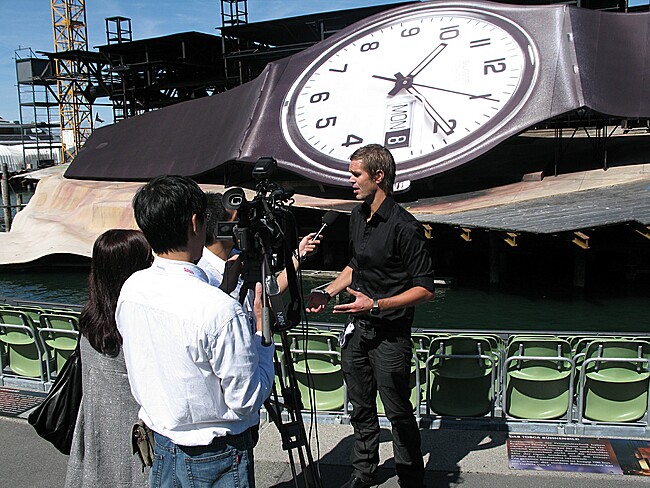 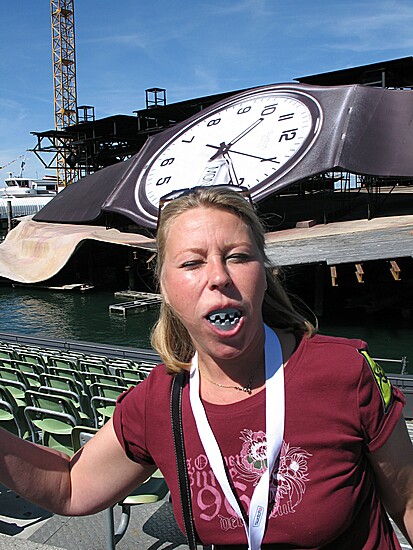 I am really frightened! 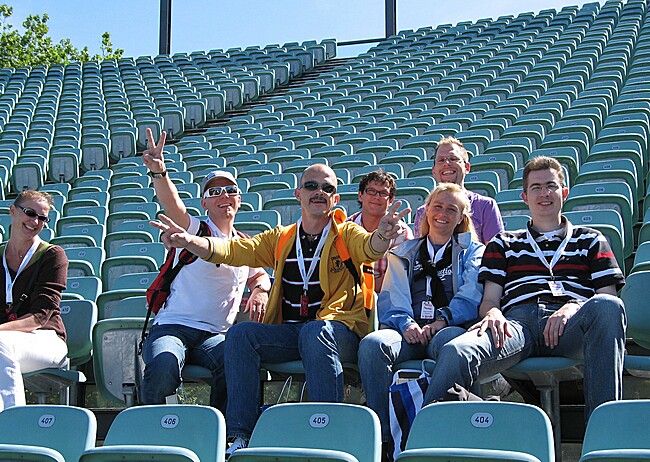 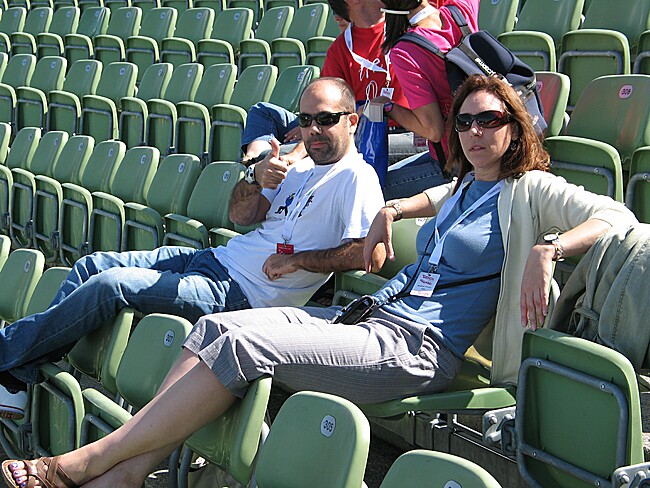 Paolo and Tracey relaxing in the sun 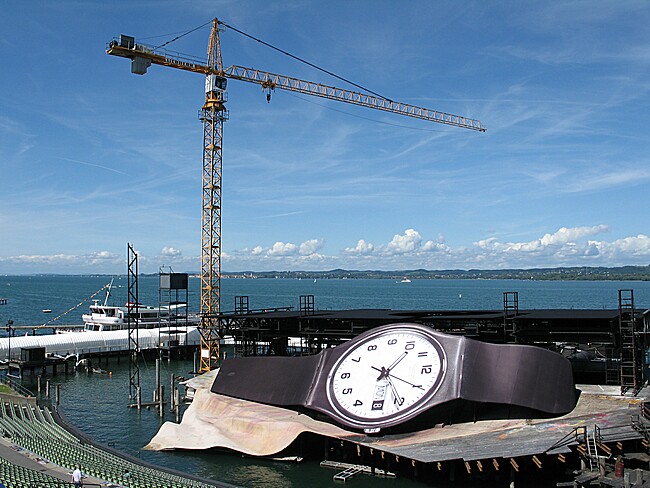 It can't get better than this! 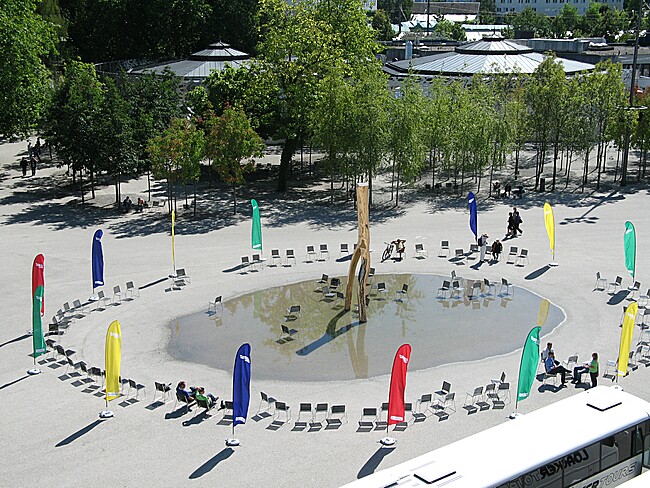 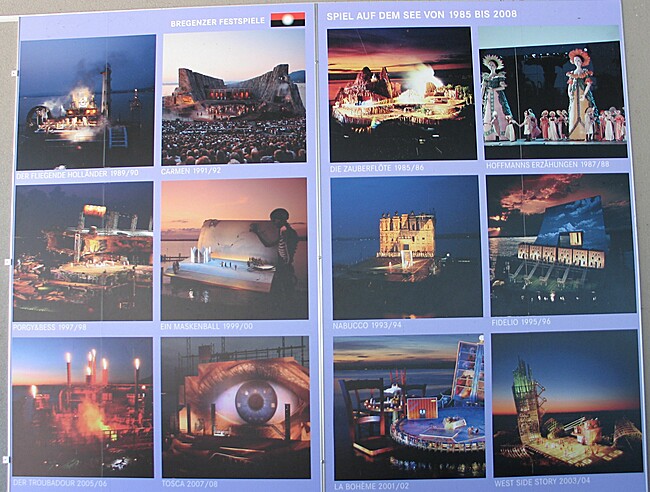 some designs of the stage from the past years, the Swatch design tops it all :-)

In the afternoon, we had to leave the Festspielhaus.  On our way back home to the hotels, we stopped in Dornbirn at the Swatch store.  The store celebrated the 10th anniversary, so Swatch had prepared a special packaging (limited to 250 pcs, unnumbered) for this event.  The Jelly In Jelly Sultans Joy (SUJK116) was sold to gold & pioneer members.  The watch (SUJK116C) comes packaged in a nice metal tin with the inscription "08/09/2008 Gold & Pioneer Members Meet The Swatch Store Dornbirn".  The watch has an extra loop with the logo of the G&P event on the strap.  As a bonus, every tin comes with a nice key chain in the same design. 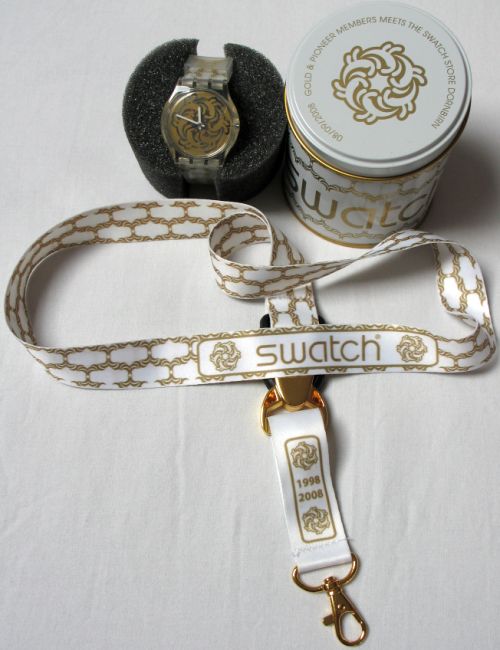 As you can see on the pictures below, the usual rush of collectors occurred when the special went on sale (OK, they also had some Austrian specials such as the Vienna Come Together special 2007 and Vienna Come Together special 2008).  Some locals asked me if something for free was given away at the store :-)  Of course not.  In the end, they had enough specials to make every collector happy. 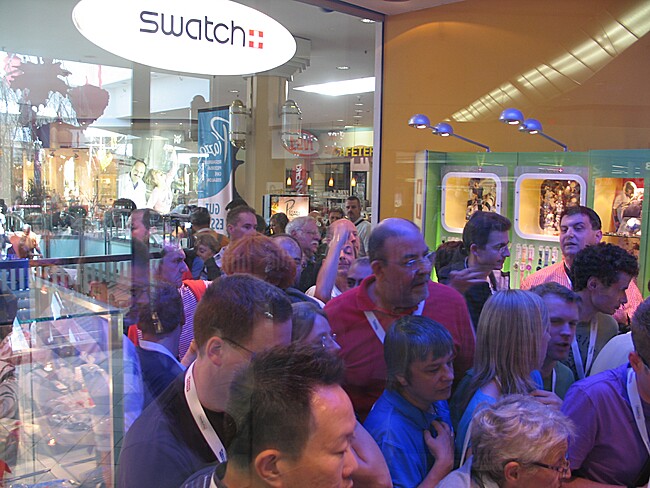 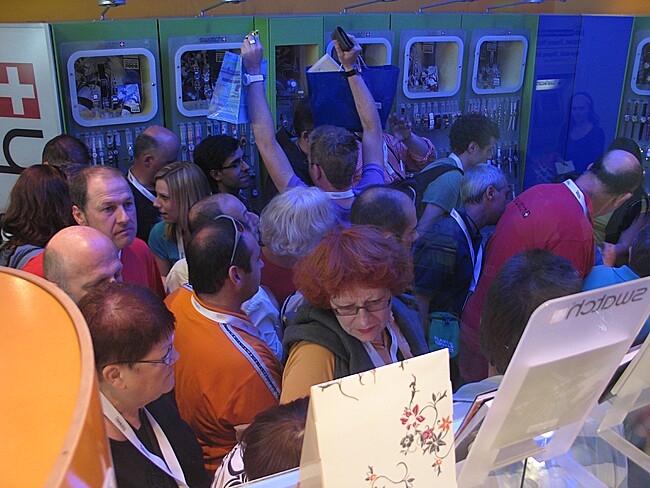 Click here to read page 4 (evening cruise with lots of action and James Bond Gala Dinner) of my report from the G&P Event 2008.