From 11 to 21-APR-2003, the "Travelling Kaleidoscope" exhibition featuring 100 one-of-a-kind art works created by an invited list of artists, athletes, VIPs, designers, ...., is shown in Munich, Germany (Galerie für Zeitgenössische Kunst Andreas Baumgartl, Platzl 4a, Mon to Sun, 12 to 19h, near the world famous Hofbräuhaus).  The exhibition was previously shown at the Athens Kaleidoscope event in JUN-2002.  A special Munich Kaleidoscope packaging (GK392-1, limited to 450 pcs, not numbered) of the olympic gent Kranaos (GK392) was given away at a VIP party (250 pcs) on 10-APR: 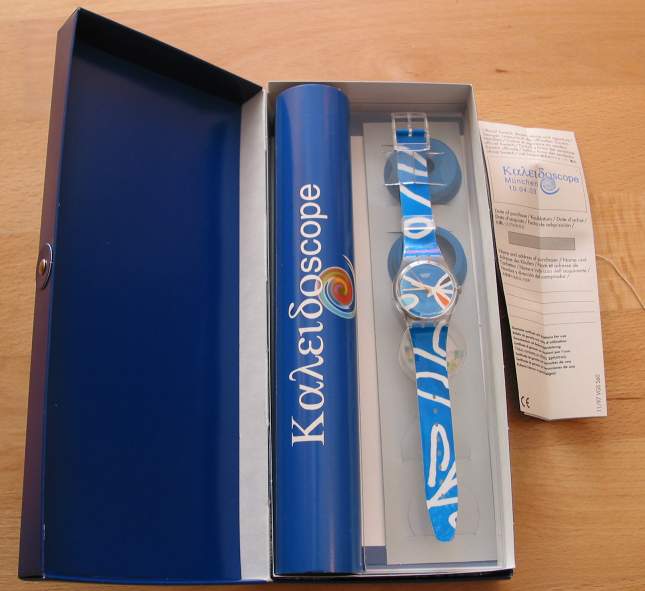 The remaining 200 pcs were sold limited at a Swatch The Club Germany event on the 11th.  Former olympic champion Carl Lewis was present at the Swatch Store Munich to sign the special.  About 50 club members participated at the event and queued up early for the signing:

At 11am, Carl arrived and started to sign autographs:

Carl only gave one autograph at a time, so I had to queue up about 10 times to get everything signed that I wanted (I now have an USA Olympic Team gold NOC Atlanta 1996 [GZ150JA] signed by Carl :-)

After the signing, we walked to the exhibition in the gallery near the Hofbräuhaus (only 5 mins walking).

To celebrate the opening of the exhibition on 11-APR, a VIP party took place on the evening before on the 10th. Many famous German athletes, actors, and other VIPs were invited to the party and signed the following board:

The following pictures show a few examples of the artwork being shown at the exhibition:

See more pictures from the exhibition on page 2 of the report.

Back to Stay Tuned To Swatch.